The culinary influence of the African diaspora profoundly shaped the foodways of the South, and the deep cultural knowledge of enslaved Africans on Southern plantations led to the growing and cooking of dark leafy greens becoming a regional specialty. These greens have long served an important nutritional role for Southerners, and a patch of collards could provide essential minerals and vitamins over a long harvest season. Over the years, growers also saved seed and developed a wide diversity of locally selected varieties across the South.

Launched in 2016, the Heirloom Collard Project aims to preserve this heritage and celebrate heirloom collards (and their histories and stories) across the United States. Over the past five years, the project has built a coalition of seed stewards, farmers, gardeners, chefs, and seed companies to do just that. The project—a collaboration between Seed Savers Exchange, Southern Exposure Seed Exchange, Working Food, and the Utopian Seed Project—was inspired by the work of Edward H. Davis and John T. Morgan as well as collard seed savers. From 2003–05 Davis and Morgan traveled the Southeast and collected over 70 remarkably diverse collard varieties from dedicated seed savers. Their work is detailed in the book Collards: A Southern Tradition from Seed to Table.

Because most of the seed savers contacted by Davis and Morgan were over the age of 60 and did not intend to share their seeds with the next generation of seed savers, the two men saw this collection as an act of preservation, safeguarding these varieties for future generations. They donated their samples to the USDA, and in 2016 Seed Savers Exchange requested 60 of the varieties to steward and share via the Heirloom Collard Project.

The Collard Variety Trial, conducted in 2020 as part of this project, was a collaborative initiative that enlisted 250 gardeners and farmers around the country to grow and experience 18 heirloom collard varieties, some from the Davis and Morgan collecting trip and others  independently donated to the Seed Savers Exchange collection. This trial allowed growers to connect with pieces of the past by learning about these seeds and their stories. It also provided crowdsourced data documenting growing characteristics of these rare varieties, compiled using the online trialing platform SeedLinked.

This innovative platform allowed participants to collect data via their computer or smartphone. Participants tracked their varieties over the growing season and rated nine different traits: germination, vigor, yield, appearance, winter hardiness, taste, earliness, disease resistance, and uniformity. We selected these traits to paint a picture of how these varieties performed in gardens and farms around the country. Participants were randomly assigned three collard varieties to grow in their system. For each trait, participants rated the best and the worst variety. This rating system helped to differentiate the data so that the varieties didn’t all receive an average rating. The data provides a “convenience sample” of the participants as all participants volunteered to participate and weren’t randomly selected.

The performance of most varieties varied from trait to trait. Some varieties scored high in one category but low in another. For example, ‘Green Glaze’ scored high for uniformity, 4 out of 5,  but low for earliness, with a score of 1.86. However, five varieties scored consistently around 3 for all traits evaluated, suggesting they are stable varieties and performed well across the trial in a wide range of conditions. Based on our preliminary trial results, these varieties—‘William Alexander Heading,’ ‘William Moore,’ ‘Brickhouse Old Collard,’ ‘Georgia Blue Stem,’ and ‘White Cabbage Collard’—appear to perform most consistently in gardens and farms across the United States.

The Collard Variety Trial also included two control varieties common in the seed trade today: ‘Georgia Southern’ and ‘Vates.’ We included these varieties in order to compare the 18 other heirlooms to popular varieties widely available in the seed trade. Figure 1 shows how the yield of the heirlooms compared with that of these standard varieties. ‘Georgia Southern’ scored above average at 3.3 (ranking #8), while ‘Vates’ came in last (ranking #20) with a score of 2.0. This suggests that trial participants observed other heirloom varieties—such as ‘William Alexander Harding,’ ‘Miss Annie Pearl Counselman,’ and ‘Georgia Blue Stem’ (which ranked # 1, 2, and 3, respectively)—to be more productive than the current industry standards. In another trait of interest (vigor), both ‘Georgia Southern’ and ‘Vates’ scored above average—3.6 and 3.2, respectively. However, ‘Georgia Southern’ still ranked number 6 and ‘Vates’ number 7, which again suggests that the participants observed some heirloom varieties to be more vigorous and other varieties to be less vigorous than the control varieties.

All participants created an account in SeedLinked and self-identified as either a farmer or gardener since farmers and gardeners typically have different growing systems and different growing goals. Gardeners usually grow plants for themselves, while farmers sell produce to their community. We were curious to see if these two distinct groups would score the collards differently in, for example, the highly subjective trait of appearance. (It is important to note that the sample sizes of these two populations were drastically different; there were 52 farmers and 192 gardeners.)

In addition to the participants who grew three varieties, we also had eight “full-trial” sites that grew all 20 varieties. Participants in the full-screening trial scored their varieties on a scale of 1-5, with 5 being best and 1 worst. We received the most data from the Pacific Northwest and South Florida as there were three full-trial sites in the former and one full-trial site in the latter. Taking all traits into account, varieties ranked differently between the two climates. The varieties that ranked in the top five for the Pacific Northwest and South Florida trial sites were different with the exception of ‘Miss Annie Pearl Counselman,’ which ranked third in the Pacific Northwest and tied for third in South Florida. This suggests that some varieties may be better adapted to certain climate conditions, whereas varieties like ‘Miss Annie Pearl Counselman’ may have wider appeal. If we look at all traits for all full-trial sites, ‘Miss Annie Pearl Counselman’ has the highest rating of 4.29; however, this is an average of all scores and does not mean that this variety is superior. When looking at traits in isolation, ‘Miss Annie Pearl Conselman’ does not always have the highest score.

Staff at Heritage Farm have also evaluated each of the 18 heirloom varieties to generate a basic profile for our records. In some cases, the 2020 trial data supports this evaluation data, while in some cases it does not. Take, for example, flavor. Flavor is a highly subjective trait as all participants have different taste buds, but it can also be highly influenced by the environment it’s grown in or seasonal conditions it faces. In the Collard Variety Trial, ‘Jernigan Yellow Cabbage Collard’ scored highest with an average score of 4. Seed Savers Exchange staff agreed on this, describing it as “sweet with a buttery-like taste.” It was these flavor characteristics, along with its intriguing history, that made it a great addition to the Seed Savers Exchange catalog in 2018. The collard variety with the lowest score (2.25), ‘White Mountain Cabbage Collard,’ was also evaluated favorably at Seed Savers Exchange’s Heritage Farm in 2017; staff described it as having a “succulent, excellent flavor.” This is a good reminder that taste preferences are highly subjective and very personal—the best way to assess the flavor of any of these varieties is to grow them yourself and cook them in your favorite collard-centric dishes.

The 20 collard varieties included in the trial showed  tremendous diversity. In some cases, scoring the varieties against each other may have made for an unfair comparison. For example, how do you fairly compare the appearance of a purple-veined variety to a yellow cabbage collard when they are so distinct? For future trials, it may be worthwhile to separate all yellow cabbage collards—or all pigmented varieties—and focus on the differences within a specific type. We could also take a deeper dive into the culinary traditions of collards and work with chefs to trial traditional recipes. For example, a number of varieties in the Seed Savers Exchange collection have a history of being used to make sauerkraut. These varieties could be grown and analyzed for which variety makes the best sauerkraut and what specific characteristics stand out in that variety, like the spiciness or the texture of the leaves.

The overarching goal of the 2020 Collard Variety Trial was to connect growers with seeds of these rare varieties and encourage them to grow and experience these varieties for themselves. This year, the Heirloom Collard Project team is focused on identifying a group of seed stewards committed to regenerating low-quantity varieties from the Seed Savers Exchange collection. With continued regeneration of these varieties, we can continue to share even more of them with the larger seed community. As of July 2021, we have 15 dedicated seed stewards around the country signed up to regenerate these special varieties. We are excited to have more seed and more heirloom varieties to share through the Exchange, both the Seed Savers Exchange and the Southern Exposure Seed Exchange catalogs, and other avenues.

Here is a link to the trial data so that you can manipulate it yourself! Keep in mind that this data comes from growers across the country who are growing from their unique systems with their own preferences and personal biases. This data provides a glimpse, or a snapshot in time, of how these heirloom varieties performed across the country today. We recommend choosing the traits that interest you the most and selecting your hardiness zone in order to get a clear assessment of crop performance. The best way to assess these varieties is to try them out yourself! All of these varieties are available either via the Exchange or the Seed Savers Exchange catalog. Happy collard growing! 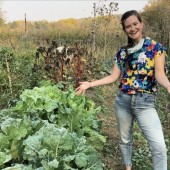 Norah Hummel is the Seed Bank Manager at Seed Savers Exchange. Norah’s interest in sustainable agriculture grew while co-managing the University of Washington’s urban farm. Since joining the SSE Heritage Farm team in 2016, Norah has contributed to the seed regeneration efforts and evaluation of hundreds of vegetable varieties. Today she manages the seed resources at Heritage Farm by prioritizing seed for regeneration and curating the collection’s 25,000 accessions. She also manages the RENEW program partnering with growers across the country to regenerate varieties from the collection. Norah is inspired by the Seed Savers Exchange mission to provide open access heirloom and historic varieties to the public.

The Heirloom Collard Project is a surprisingly Northwest success

Heirloom collards in the spotlight